As an introvert and an incredibly shy person with social anxiety, it is already had going out each day and interacting with people but it is hard on another level in Nigeria. Many people do not get why you should be quite, they take it as a form of weakness and immediately ‘place you in a box’. What is with people are placing other people in a box? I have had opportunities pass me by because I was not as ‘loud’ as my peers were but anyway this post is not that deep. I will like to share a sort of humorous experience I had when I was younger because I was shy, mind you at the time, it was not so funny for me but I can laugh about it now.

I was seventeen and had just finished my hundred level. My parents thought it wise that I do an internship at a company my dad worked in. That was fine, I would have something to put in my CV so I was pretty excited and nervous at the same time. For those with social anxiety like me, going to a new environment filled with new people can be very frightful but I stayed positive.
It started well; I did my work well and was generally happy. Because my dad was there, I would always go to lunch with him. I was scared to talk to anyone and because as a young girl there were many men flocking around so once they saw and knew who my father was they were too scared to approach. At that time, I did not know how to dismiss unwanted men on my own, still do not know until today.

After work I would always go back home with my dad so I had a system and my anxiety greatly reduced. Everything was in place and was going to be just fine………well until one day my dad told me I wouldn’t be able to go home with him. That day he had a lot of work and had to close late. I volunteered to go home on my own, I would just take a bike, which I was used to doing even before my internship there but he was worried about how crazy the okada riders were and how bad the roads had gotten so he insisted I take the staff bus. New environment, new set of people and so began the flare up of my anxiety. Eventually after much argument, I took the bus and we were on our way. It was filled mainly with loud, rowdy men arguing political and economic issues at the top of their lungs. There was loud, hefty laughs from the spectators of their discussion and those who were not paying attention to them where making phone calls and screaming at the top of their lungs to speak above the noise. It was a noisy bus and I was just at the corner all by my lonesome.

My estate was fast approaching and I had to come down, I did not know how I would get the drivers attention over the noise. I was too shy to shout so I just sat there deliberating on what to do. Thankfully, one of the men shouted that he was stopping here. I quickly took my bag and ran off the bus with my little legs, breathing a sigh of relief when I came down.
Fast forward to the next day, he had to close late again and I had to take the bus. The only difference this time was that when it got to my estate no one shouted for the driver to stop. The bus passed and I was just there. My heart was pounding as I was trying to decide how to let him know I was meant to come down. Eventually we were about five minutes passed my estate when I told the man beside me to help me get the drivers attention. After doing so he turned to scold me and well ‘teach me a life lesson’ about being bold, turning it into a general bus discussion and I became the center of attention as if that would aid my shyness. I felt embarrassed to say the least and as I came down from the bus, I still heard their loud voices talking about how it shows no competence and all that.

Today I am still shy, introverted and have a truck load of social anxiety but I have learned to not show it which took years of many embarrassing moments because in Nigeria and maybe other places too, if you are ‘shy’ then you are not fit, nobody is patient enough to give you the chances you need. It seemed only the extroverted folks were winning and my little quite self was losing but I was wrong.

It has been an eventful journey of not losing myself in the process of being more socially acceptable. I will not change me for the world and no one should likewise change himself or herself. It sounds cliché but you are at your best when you are you and instead of seeing all these things as a disadvantage I see them as my ‘in spite of’. That in spite of the fact that being in social situations makes my cringe I still lead, I still teach, I still make friends and still make my dreams happen. What is your ‘in spite of’? Do not let your environment change that. You can adapt and adjust but never ever change. 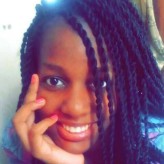 Through the Eyes of a Nigerian Child